The Democratic Republic of the Congo is located in Central Africa. It is bordered by the Central African Republic, South Sudan, Uganda, Rwanda, Burundi, Tanzania, Zambia, Angola and the Republic of Congo. The country has a rich supply of economic

resources, mostly in the form of mineral wealth however the country is rated as the poorest country in the world.  The population of the Democratic Republic of the Congo is approximately 71,712,867 million. There is a total female population of 36,044,459 million. There is a high rate of infant mortality at 78.43 deaths per 1,000 births; this is the thirteenth highest rate globally.

Rape has been used as a weapon of war in the overlapping conflicts that have rumbled on in D.R. Congo since 1996, causing millions to die of illness and disease. It is estimated that hundreds of thousands of women

have been raped in attacks aimed at terrorizing civilians, humiliating the enemy, and ethnically cleansing regions. Many of the survivors are condemned to live with permanent phys­ical damage, such as destroyed reproductive organs or HIV/AIDS. Others suffer post-traumatic stress disorder and social stigmatization, and others have had to raise children born of violence.

In October 2012, Wezesha directors travelled to DR Congo for a field visit, where they met with government officials, non-governmental organisations and women’s groups. Wezesha used this visit to begin the establishment of local projects and connections, as well as assessing current needs. 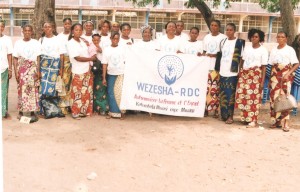 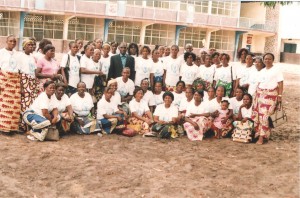 The group first met with Mr. Clement Mbikayi, who worked with the Minister in charge of Finance. He explained the role of the office, which included supporting projects, managing finances and monitoring money coming in and out of the country. Later during the visit, the group met with Caritas, where several staff members explained their work and outlined areas of synergy and collaboration. Most of their programmes targeted women, in areas which included the mineral fields, small trades, forest governance, food security, poverty relief, civic education, microfinance, health, emergency services, migration, the reinforcement of peace and channeling of goods. Areas of collaboration identified at this meeting included microfinance, renewable energy, reproductive health

, addressing HIV/AIDS and other STDs, access to water and housing issues.

During this period, the group also visited the Fistula Clinic at St. Joseph Hospital, based in Kinshasa. Women come to the clinic from different provinces within the DRC, as well as from other African countries. Since the opening of the clinic, 600 patients have received reconstruction of their reproductive organs, which costs an average of $1000 on one fistula patient. For some patients it may take up to three surgeries before they are discharged. Patients also need a specific diet to aid in the recovery process, and psychological support is essential, since most women are neglected and abandoned by their families. Since treatment lasts about three months, during which the patient needs to be monitored by the clinic, the biggest challenge faced was accommodating

women due to a lack of space. Additionally, women need to be prepared to reintegrate into their communities post-recovery. An area of intervention currently being undertaken by Wezesha is the establishment of a centre for the pace and advancement of women to facilitate full recovery, development and well-being. 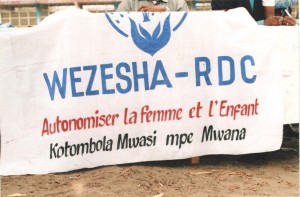 The group also met with Dr. Kalume Tutu, the Head of the 10th Direction, which deals with family health, and his team in the Department of Public Health. The Wezesha team was able to meet

with the 14 division heads under his direction in Kintambo Hospital, with a brief presentation of services covered by their offices.

During this time period, the group also visited the Kizito-Anuarite Boarding School

, an initiative of Fr. Pierre Bosangia, the founder of the youth group Kizito-Anuarite, which supports young teenagers in looking at African martyrs, Kizito (from Uganda) and Anuarite (from DRC), as models of courage and perfection. With 160 total students, the school faces challenges that include a lack of materials for learning, motivation and role models for the children.

These meetings helped Wezesha to survey

local issues and form connections with the aforementioned groups. Despite weighty challenges to peace, education, resources

and health faced by women and children in the DRC, Wezesha has been able to identify key areas where improvements can be made.

After the 2012 visit, the aim of which was to explore the establishment of projects and partnerships, the emerging need that was identified was the implementation of a women’s centre to support women empowerment. In February 2013, Wezesha developed a work plan

that included the sourcing of funds to advance the work in DR Congo. To execute the activities outlined in the plan, Egide Dhala relocated to the DR Congo for three months (Oct 2013 – Jan 2014) and was joined by Salome Mbugua in mid-December. Some of the key activities of the plan were the establishment of Wezesha DRC, which included identifying partner organisations, developing structures, linking with local organisations and exploring the possibility of establishing a women’s centre in Kinshasa, which, with a population 12 million people, currently lacks even a single centre to cater to female victims of violence.

Prior to the trip, contacts and discussions had been made, and Egide Dhala brought several donated materials and fund-raised money on the trip. During the period of the field visit, contacts and meetings were held with connections established in 2012, as well as other women groups to explore the situation of gender-based violence in the country and the state of existing support groups. It was discovered that such groups are not visible in Kinshasa, or face a lack of resources, and that issues of violence against women are neglected.

In a meeting with the St. Joseph Hospital Director, Dr. Dolores (Fistula Clinic), it was discovered that over 30 patients are undergoing surgery and that the hospital does not have enough resources for these patients, including pre- and post- surgery accommodations

, which requires a 3 month minimum stay. Dr. Dolores also pointed out that many female victims of domestic violence attend the hospital for medical treatment; yet, there is a lack of follow up for their re-integration back into society. During this time, contact was also made with two orphanages in the suburb of Kinshasa run by religious congregations.

Much of the work during this period focused on establishing women

Over the course of the visit, Wezesha was able to explore the situation of women in the DRC and make connections with the aforementioned local groups. Despite challenges, Wezesha has been able to identify and build strong links in the area. True empowerment can only be realised when women are given the opportunity to lead interventions that can bring change into their lives, which is why a strong Wezesha women’s group has been established in Kinshasa to oversee the development of objectives and activities that will help Wezesha realise its vision for DRC. Wezesha directors continue to support them mainly through technical support

, which includes mobilisation techniques, strategic planning, implementation, operational planning and management, which include development and delivery of training on key identified areas of research and organisational development. This will not only see many women join Wezesha Congo but they will also be working in solidarity to tackle recurring conflicts in D.R.Congo and promote sustainable development.